Coffs Harbour weather is like living in a story book. Never too cold,  never too hot and always just right Coffs Harbour has the most livable climate in Australia.

But why is the weather in Coffs Harbour so good? We are subtropical a zone which kicks off way up north in Townsville QLD and runs south all the way down the east coast of Australia to Port Macquarie NSW. Coffs harbour sits towards the southern end of this zone where it enjoys less of the stifling humidity of the northern regions and none of the bitter cold. 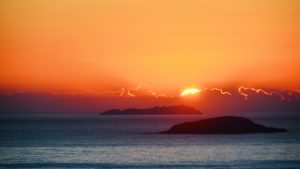 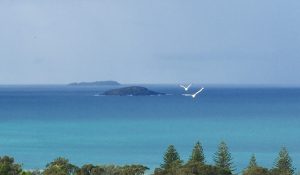 The magic happens along Coffs Harbours 75km stunning coastline where a warm tropical current comes down from the barrier reef to meet the gold southern ocean water from Antarctica. Giving the Coffs climate the best of both worlds

The mixing pot of these two hot and cold ocean waters also gives Coffs Harbour it’s diverse marine life. Just off the coast of South Solitary Island was discovered the largest recorded variety of sea anemone in the world along with 600 molluscs and 90 hard corals in our own coral reefs.

The Coffs Coastline is often called the Humpback Whale highway. In May or June you see them speeding past on their way to their breeding ground in Harvey bay. On the way back the shallow waters between the islands and Coffs Coastline affords some protection for their young calves from the sharks and orcas that live in the deeper ocean. Not to be confused with the beautiful grey nurse sharks, nicknamed the labradors of the sea that frequent the marine parks around Coffs Harbour.

So when you come to Coffs Harbour, rest assured you are leaving sweltering hot days and freezing winters behind and any warm day is a great excuse to visit our amazing beaches.